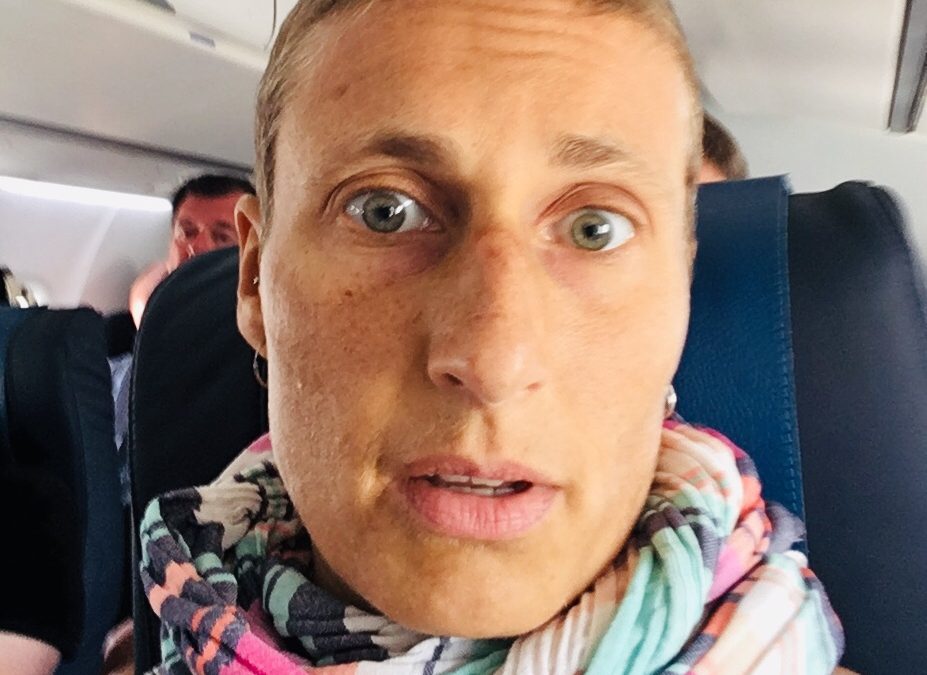 Two days ago I took a one hour flight on a pretty small airplane (68 seats).  I sat on the aisle, but the window seat next to me wasn’t taken, so I had a good view out the window and some room to stretch out a bit.

I get nauseous easily, especially after my pregnancies.  I feel like my vestibular sense is very sensitive, but even as a child I used to get carsick a lot.

It had been very windy over night and seeing the small plane, I hoped that the flight wouldn’t be too bumpy.

We started ok.  I was also very tired from getting up at 5am and decided to meditate or maybe even fall asleep for an hour to feel like new and refreshed on arrival.  I was able to calm my mind and breathe through the occasional dips in the air and was very happy when they announced that we would be landing shortly, “In about 20min,” they said).

Going down was pretty bumpy.  I concentrated on breathing and taking sips of cold water and having good thoughts of being back on the ground soon. We were almost down, over the runway…and I knew that something was not right.  I sensed we weren’t down far enough and all of a sudden the pilot pulled the plane back up.  Up quickly!

We were back in the low clouds within seconds and I saw the island getting smaller while everybody had a look of terror in their faces.  Nobody really said a thing, though. Only a guy two rows in front of me, across the aisle, who was loudly trying to calm down his wife who was sitting across the aisle from him.  I didn’t understand his Spanish, but clearly she was having a very hard time and he was a bit annoyed, but still trying to talk her out of a panic attack which wasn’t really helping my state of mind.

I was waiting for the pilot or co-pilot or even a steward to tell us what was going on, but nobody was going to inform us.  Slowly, people started talking again.  I had the feeling that these people were used to this.

I was even more nauseous and tried to hold it together.  I pulled out the puke bag, just in case.

When the pilot pulled the plane back up, I turned off my airplane mode on my phone and texted my husband that for some unclear reason we were back up in the air.  I told him that nobody was telling us what was going on.

Luckily he was online and tried to calm me down.  He said that the pilot was probably very busy now trying to figure out how to get us on the ground safely and that I shouldn’t worry.

The next 15 minutes or so crawled by very slowly.  I was trying to supervise my thoughts which was very interesting.  Part of me wanted to panic a bit. Thoughts like: What if ‘this was it’? crossed my mind.  Did I live a good enough life to be ready to go now? Would my children be able to grow up the way I was hoping for them to grow up? Would my husband be able to take on the burden of a single dad?

But, I am pretty good at watching these thoughts and going back to grounding myself and hoping for the best and understanding that I am not in real danger at that moment.  No need to panic just yet.

Instead I focused on having good thoughts.  I was actually connecting to the pilot.  I was cheering him on with thoughts of:  I trust you, that you will bring us down safely. You are doing a great job. We all believe in you.  And I am very thankful that you did not land, because I am sure there was something wrong, either the wind going up was too high or there might have been an airplane still in the way.  I am glad you made the right decision to bring us back up in the air!

And then I was telling myself: It’ll just be another couple of minutes.  Next time, he will bring us down safely.  You will have a great time with your brother and nephew and when you are back, you will give your kids and hubby extra big snuggles.

A sense of gratitude and trust filled me already at that moment and I told myself that it would be even greater the second we would land.  I was very sure that I would live and that I would be even more thankful for the time I get to live on this planet and I get to spend with my family. Time is limited and I have done great things in my life, but I am going to do much more. I want to make this world a better place and live my passion of spreading freedom much more intensely and in an even more fulfilling way. I have changed so much in much life in the past years, but there is so much still in progress and I am so very curious how everything will turn out. So, right now I am not ready to go and I will do my best to focus on bringing my plans into life and enjoy life to the fullest.

Before we finally landed I felt like all color had left my face and my lips must have been greenish. I started sweating, but had the chills at the same time. I wondered if I would faint if I couldn’t put up my feet … But I made it and after we hit the ground, my vitals slowly recovered.

I was still a bit shaken when I met up with my brother and family outside of the airport, but the happiness of being alive and safe and now with them, brought my body back to normal, out of the shock.

Now, I just hope that my flight back will be very uneventful.  I am a bit scared of our long flights to Madagascar next week, but know bigger planes are far less bumpy in the air, I will be with my family and not alone.

I am thankful for these little reminders in life that make me aware of how grateful I can be to be living the life I am living now.  And I get it.  I hear you, universe!

With lots of gratitude to be alive and safe!

Do you want to feel free?

We use cookies to ensure that we give you the best experience on our website. If you continue to use this site we will assume that you are happy with it.OkRejectPrivacy policy